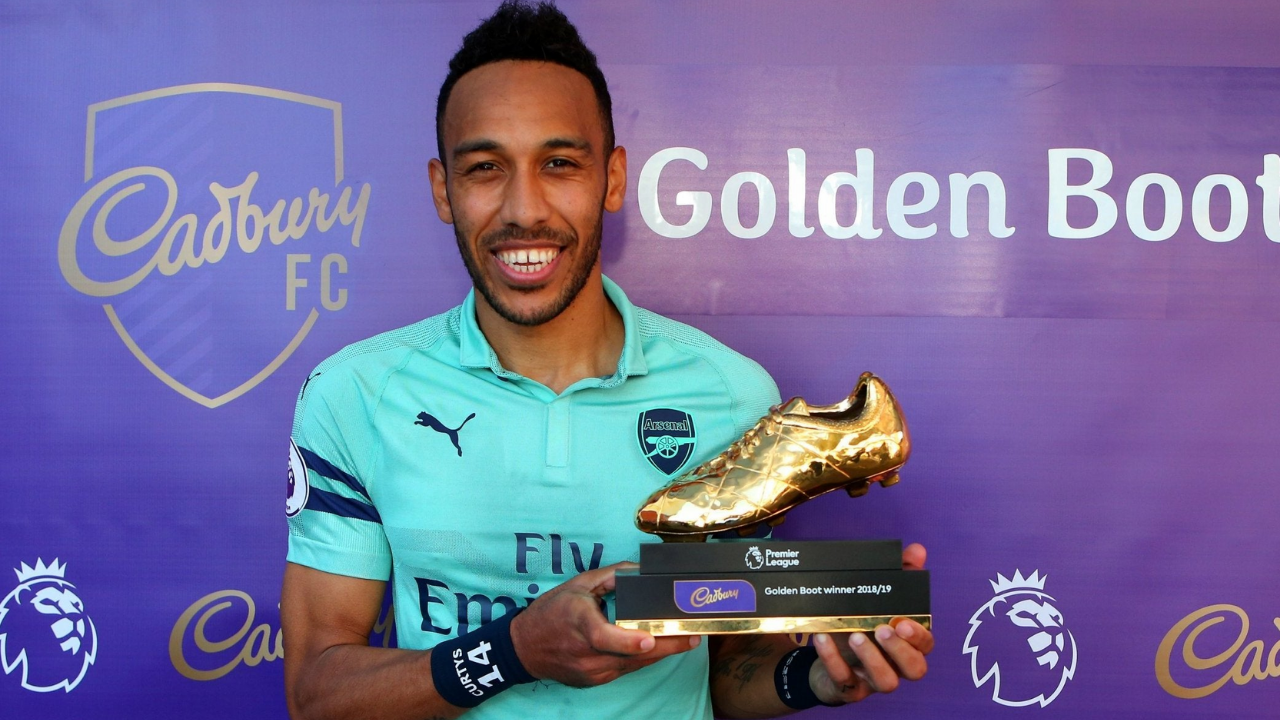 The 2018/2019 Premier League season saw Africa achieve a rare feat as three of its finest footballers in Mane, Mohammed Salah, and Pierre Emerick Aubameyang all finished as the joint top goal scorers, with 22 goals each.

The trio has continued to be a shining light in the Premier League; with Mohammed Salah and Sadio Mane contributing hugely to Liverpool’s league triumph in the 2019/2020 season. Whilst Aubameyang has been the major driving force for Arsenal’s Europe qualification dreams.

As the 2019/2020 Premier League campaign draws to a close, we assess Africa’s prospects for the golden boot award;

The captain of the North London side, Arsenal is a known goal-scoring machine.

Aubameyang is one of only four players to have scored 20+ goals in five consecutive seasons in any of Europe’s five major leagues. He’s alongside usual suspects Lionel Messi and Cristiano Ronaldo and Lewandowski.

Pierre-Emerick Aubameyang has scored 20+ goals in seven of the last eight seasons.

Aubameyang’s prospects are very high given that goal-scoring comes easy for the Gabonese forward. He’s already won the golden boot before in his first full season in the Premier League. At 20 goals and counting, he is looking good to do it again.

While playing against Norwich City, in a 4-0 rout, Aubameyang’s first goal was his 50th in the league for Arsenal. Add to his resume being the quickest player to reach 50 goals for the club in the Premier League era.  Aubameyang achieved the feat in just 79 league appearances, four games quicker than all-time club goalscorer Thierry Henry.

Next set of possible fixtures for Aubameyang- Tottenham, Liverpool, Watford, and Aston Villa.

While it may be difficult for Aubameyang to bang in the goals against Jose Mourinho’s Tottenham Hotspur and against Liverpool, one can easily back Aubameyang to score as many as five or six goals against Aston Villa and Watford. Villa and Watford are teams that have conceded 62 and 53 goals respectively in the Premier League having two of the six worst backlines in the league this season.

It’s rare to have Mohammed Salah as 2nd on any list, especially one that involves African footballers. However, as Liverpool has already won the 2019/2020 Premier League campaign, Klopp has a tendency to give the younger boys a chance. Plus, as seen in the match against Manchester City, where Liverpool lost 4-0, Jurgen Klopp’s side momentum has dropped.

The mercurial Salah still managed to have a great individual showing against Brighton, scoring two goals and providing an assist. This impressive performance brought his tally to 19 Premier League goals this season. He’s just one shy of Aubameyang and three behind leading top scorer, Jamie Vardy.

Salah has been a consistent goal scorer; winning the Premier League golden boot award back to back- first in the 2017/2018 season and in the 2018/2019 season.

Earlier on in the season, Salah’s 20th goal of the season saw him become the first Liverpool player to score 20 goals in three consecutive seasons since Michael Owen between 2000–01 and 2002–03.

Salah has reached 100 goal involvements for Liverpool in the Premier League, having scored 73 goals and provided 27 assists in only 104 appearances.

Next set of possible fixtures for Salah- Burnley,  Arsenal, Chelsea, and Newcastle.

As Sadio Mane may be well and out of the Premier League golden boot, there is a tendency for the entire Liverpool team to try and help Salah chase the individual honor in the matches left.

Who knows, Salah could well still Trump Aubameyang and Vardy in the golden boot race.

The reigning African footballer of the year has scored 16 goals for Liverpool in the Premier League this campaign. Mane’s prospects are similar to that of Salah given that they have the same set of matches left to play.

To win the golden boot award this time around, Sadio Mane would have to pray Vardy stops scoring as he is already 6 goals behind the Leicester City forward.

It won’t be enough for Mane to hope Vardy stops scoring, he himself needs to score at least 7 more goals in the remaining fixtures.

Again, Klopp would have to start him in the remaining four fixtures which remains unlikely as he rested Mane for the opening hour against Brighton in Liverpool’s last Premier League game.

To be fair to Mahrez, goal scoring has not been his major calling.

In the current campaign, Mahrez has scored 10 goals for Pep Guardiola’s side, and it’s going to take the unthinkable for the Algerian wizard to top the likes of Aubameyang and Vardy, Danny Ings on the chart.

Next set of possible fixtures for Mahrez- Brighton, Bournemouth, Watford, and Norwich.

It’s still a remarkable feat for Mahrez to be the 4th highest goal-scoring African in the Premier League this season.

It would be easier for an elephant to pass through the eyes of a needle than for Jordan Ayew to win the 2019/2020 Premier League Golden Boot Award with all due respect to Ayew.

He plays for Crystal Palace and there are just four games left and he currently sits on just 9 goals.

For Jordan Ayew, he has been the go-to man for Crystal Palace delivering the goods for Roy Hodgson’s side.

Ayew was on target for Crystal Palace against Manchester United in a big win in August while scoring two goals against Arsenal and a solo goal against West Ham which will surely be a contender for goal of the season.

Palace is on course to record their highest Premier League points total for the second consecutive season.

He’s contributed to nine goals and represents more than 30 percent of their total goals scored in the Premier League this season.

If he continues getting stronger and better, he will stand a better chance of winning the Premier League’s golden boot in the 2020/2021 season.