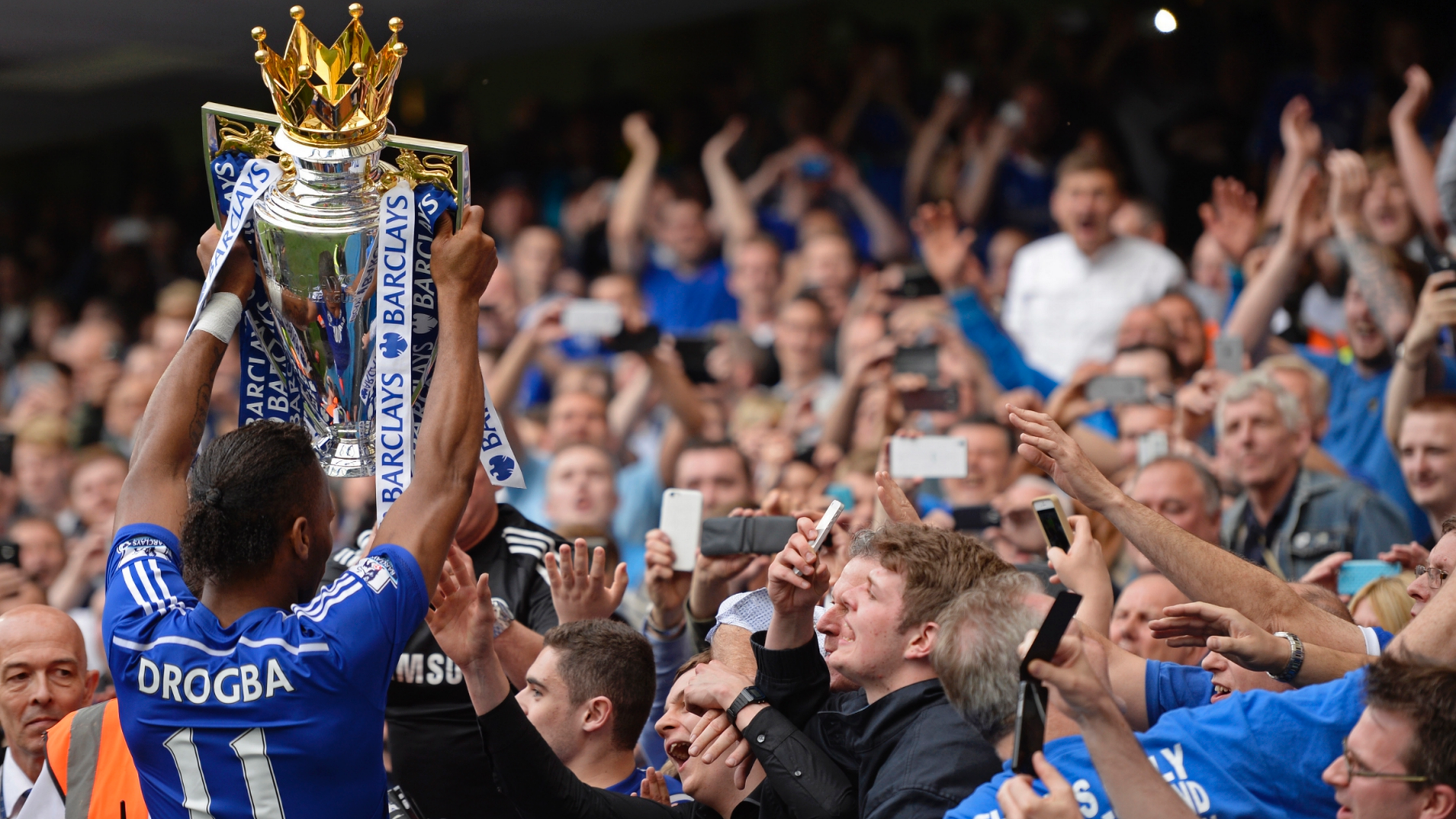 AFRICA’S MOST SUCCESSFUL PLAYERS BY TROPHIES

On the grandest of stages in world football, African footballers have won trophies aplenty.

Players like Kanu, Drogba, and Eto’o, to name but a few, have stood against all the odds to become exhilarating performers with successful careers as proof, and a good number of trophies won.

We bring to you the most successful African footballers of all time laying emphasis on the number of trophies won.

Regarded as one of the greatest African footballers of all time having played for several European clubs. His best career haul however only happened during his stay at Marseille between 1987 – 1993. His fame triggered attention during his stint at French club Olympic Marseille where he was instrumental in Marseille’s prominence in the UEFA Champions League during the early 1990s.

The Ghanaian attacking midfielder has also served as captain of the Ghana national team and he was one of the pioneers of African football in Europe.

Pele was also known for his sublime skills and his knack for scoring spectacular and important goals. He has also featured for the Ghana national team 73 times and scored 33 goals in the process. His speed, close control, passing, and dribbling skills were an attribute to reckon with as an attacking midfielder. Due to his playing ability, he was nicknamed “Maestro” and the “African Maradona”.

After his retirement at Al Ain, a United Arab Emirates football club, he went ahead to coach Nania FC in his hometown in Ghana 4 years later. A list of his accrued accolades includes 2 Ligue 1 titles, 1 UCL, 1 Pro league, 1 UAE President’s cup, 1 African Cup of Nations, and three west African Nations Cup. He was named BBC African footballer of the year in 1991 and was also named in FIFA 100.

The Ivorian marksman was a part of the history of Chelsea glory days. One could probably assume that the then manager Jose Mourinho had a soft spot for African players playing a role in his squad as he praised the young Ivorian as being hard-working and versatile after his move to the London club in 2006.

The 35-year old winger who can also play as a striker started his career in the Netherlands League at Feyenoord, where he featured 69 times for the club between 2003 and 2006 and scoring 35 times in the process, an impressive statistics which probably caught the attention of the London club. During this period, he was, however, having it easy on the pitch as he was often paired with fellow compatriots Didier Drogba upfront most of the time.

Having other African players around with the likes of Essien and Mikel was another driving force for him. In 2012 his contract with Chelsea came to an end after 254 appearances for the club and finding the net 60 times. He later played for French side Lille and German side Hertha Berlin in the closing moment of his career, picking a great form with the latter.

In July 2020, Kalou joined Botafogo in the Campeonato Brasileiro Seria A on an 18-months contract. All club honors he has ever won was at Chelsea; 1 English Premier League title, 4 FA Cups, 1 Football League Cup, 1 FA Community shield 1 UEFA Champions League trophy and 1 African Cup of Nations.

The Ghanaian-born football legend is the only defender to have made the cut in this list. German giants Bayern Munich will one day have his name written somewhere in golden ink as one of the greatest defenders to have emerged at the club. Starting his senior career at the Allianz arena, he featured 175 times between 1993 – 2005, and he was an instrumental feature in the heart of the German club’s defense being a part of the six-time league-winning team during his stay at the club.

During this time, he was also a standing figure in defense for the Black Stars of the Ghana National team, where he made 54 country appearances between 1993- 2006. Although his international career was somewhat a gloomy one in-between with the most notable being his costly mistake against Italy in the 2006 FIFA World Cup group stages that led to Ghana bowing out 2-0 to Italy, he was eventually dropped for the next three matches. In individual honors, Kuffner was named BBC African footballer of the year in 2001 and also the Intercontinental Cup most valuable player of the match that same here. As regards his trophy accolades, he has 6 Bundesliga titles, four dfb-pokal, two dfb-Liga pokal, 1 UEFA Champions League trophy, and 1 Intercontinental Cup.

Being an important member of the Nigerian National Team during the 1990s, Finidi was a right-winger with class owing to his blistering pace and subtle dribbling skills. He was a leading figure in a team that won 8 major titles, with the most notable being their back-to-back title haul emerging as Eridivisie champions all through 1993-1995. After a successful three-year stint at Ajax, he later moved to Real Betis where he netted in double digits in nearly every season he spent at the club. Finidi also spent two seasons with Premier League side Ipswich Town before he finally retired at Mallorca back in Spain in 2014. In title honors, Finidi has an accumulative nine major trophies of which eight were won at Ajax. He has in his trophy cabinet 3 Eridivisie titles, 2 Johan Cruijff shield, 1 UEFA champions league trophy, 1 UEFA Super Cup, 1 Intercontinental Cup, and 1 African Cup of Nations.

The Chelsea veteran is arguably the best midfielder for his countryside, the Black Stars of Ghana. While he was at Chelsea, his extreme physical strength and ability to support both offensive and defensive play was an undeniable attribute. His powerful and tough tackling playing style also earned him the nickname “The Bison.”

He made the majority of his club appearances for Chelsea between 2005 – 2014 featuring 168 times for the London club before securing moves to Real Madrid, AC Milan, Panathinaikos and eventually Sabail FK in the Azerbaijan Premier League in Baku where is signed an 18-months contract in March 2019, in a deal which will also see him coach the team’s under-19 team.

He was one of Jose Mourinho’s favorite players while at Chelsea, the Portuguese coach engineered his season-long loan which saw him move to the Bernabeu to join him where he was the head coach at the time. After his signature at an introductory press conference with Real Madrid, Mourinho affectionately referred to Essien as his son while Essien also referred to Mourinho as his daddy. Michael Kojo Essien as so far 12 major trophies in his running career, which are 2 English Premier League titles,   3 FA Cups, 2 Ligue 1, 2 Trophee des champions, 1 League Cup, 1 FA Community shield and 1 UEFA Champions League trophy.

Another Nigerian midfielder who got through the ranks in the English Premier League with Chelsea is John Mikel Obi. His 11 years span at the Stamford bridge will probably justify the struggle that the London club had to go through with Manchester United to secure his signature back in 2006. His strength, defensive maneuver, and passing skills have made him thrive over time in the defensive midfield role for Chelsea.

The midfielder has made 249 appearances for Chelsea, making it the most of his attendances of all teams he has featured for. Unlike other notable stars, Mikel had never won the African footballer of the year award but also has several trophies in his cabinet, most of which were with Chelsea totaling 12. Having won 4 FA Cups, 2 England premier league titles, 2 League Cups, 1 FA Community shield, 1 UEFA champions league trophy, 1 UEFA Europa League, and 1 African Cup of Nations title. One can add an Olympic bronze medal to the mix.

A famous standout performer for the Nigerian national team at the 1996 Olympic games that held in Atlanta, which saw Nigeria beat Argentina in the finals to claim gold in men’s football. Kanu enjoyed a trophy-laden season while he was at Arsenal between 1999-2004.

Worthy of boasting of being a part of the Arsenal’s invincibles team that went all 2003/2004 League season without losing a single match, he is the only African to have won a golden trophy in that regard. His goalscoring tally of 98 club career goals in 406 appearances is not much of an impressive record for the Owerri-born forward. Still, he was however named African footballer of the year in 1996 and 1999 and also bagged the BBC African footballer of the year in 1997 and 1999.

Famously known for his out-of-the-moon performances for the English club side Chelsea FC, the Ivorian striker was regarded as one of the legends to have passed through the London club. The striker’s impact at the club has been worthy of note as he has scored more goals than any other foreign player for the club, making him the club’s fourth highest goal scorer of all time.

Drogba was named in the Chelsea team of the 2010-2020 decade by Chelsea fans which are beyond doubt. Although he spent most of his playing time at Chelsea with an accumulative 254 matches scoring 104 goals in the process, he also featured various club sides in China, Turkey, France, and America before announcing his retirement at Phoenix Football club on November 2018 at the age of 40. He was named the African footballer of the year twice both in 2006 and 2009. His gallery of trophies includes 4 English Premier League titles, 4 Fa cups, 3 League cups, 2 FA community shield, 1 UEFA champions league, 1 Super Lig title at Galatasaray, 1 TFF Super Kupa and 1 Türkiye Kupası.

If there would be any attribute that could be used as a tool of intimidation by a player, this Ivorian midfielder surely utilized his vigor and height to the optimum as he stands a striking 6 ft 2  tall. Registering a greater portion of his football career appearances for Manchester City in England with 230 matches between 2010-2018.

His best years are arguably at the Etihad. While enjoying a successful career playing at the top level, he tasted victory in different tournaments with a stack of trophies to show for it.

The box-to-box midfielder originally aspired to be a striker during his youth but ended up as a top-notch all-round midfielder as he is often regarded as one of the best in the position.

Yaya Toure has put up iconic performances for his country and was voted African Footballer of the Year for a consecutive four years between 2011-2014.

Without debate, the Cameroon forward is regarded as the most decorated African footballer to have ever played the game. Pundits considered the former Cameroon international who had the prime of his football career at Barcelona FC between 2004 and 2009, scoring 108 goals in 144 matches as one of the best strikers in the world. Starting as a teenager for Real Madrid in 1997, he has since then featured for several top-tier teams, including Inter Milan and Chelsea, before finally seeing off his career at Qatar SC in 2019.

In individual honors, the striker has won the award for African player of the year for a record four times in 2003, 2004, 2005 and 2010. In the journey of his stellar career that saw him perform in Spain, Italy, England, and Turkey, he was able to win 18 major trophies in the process. These include 3 UEFA Champions League trophies, 3 Spanish La Liga titles, 2 Copa Del Rey, 2 Coppa Italia, 1 Italian Serie A trophy, 1 FIFA club world cup, 1 super coppa Italiana, 1 Olympic gold medal and 2 African Cup of Nations.

Samuel Eto’o participated in 4 world cups and 6 African Cup of Nations competitions, making him the all-time leading scorer in the competition with 18 goals. On the 7th of September 2019, he announced his retirement from football.