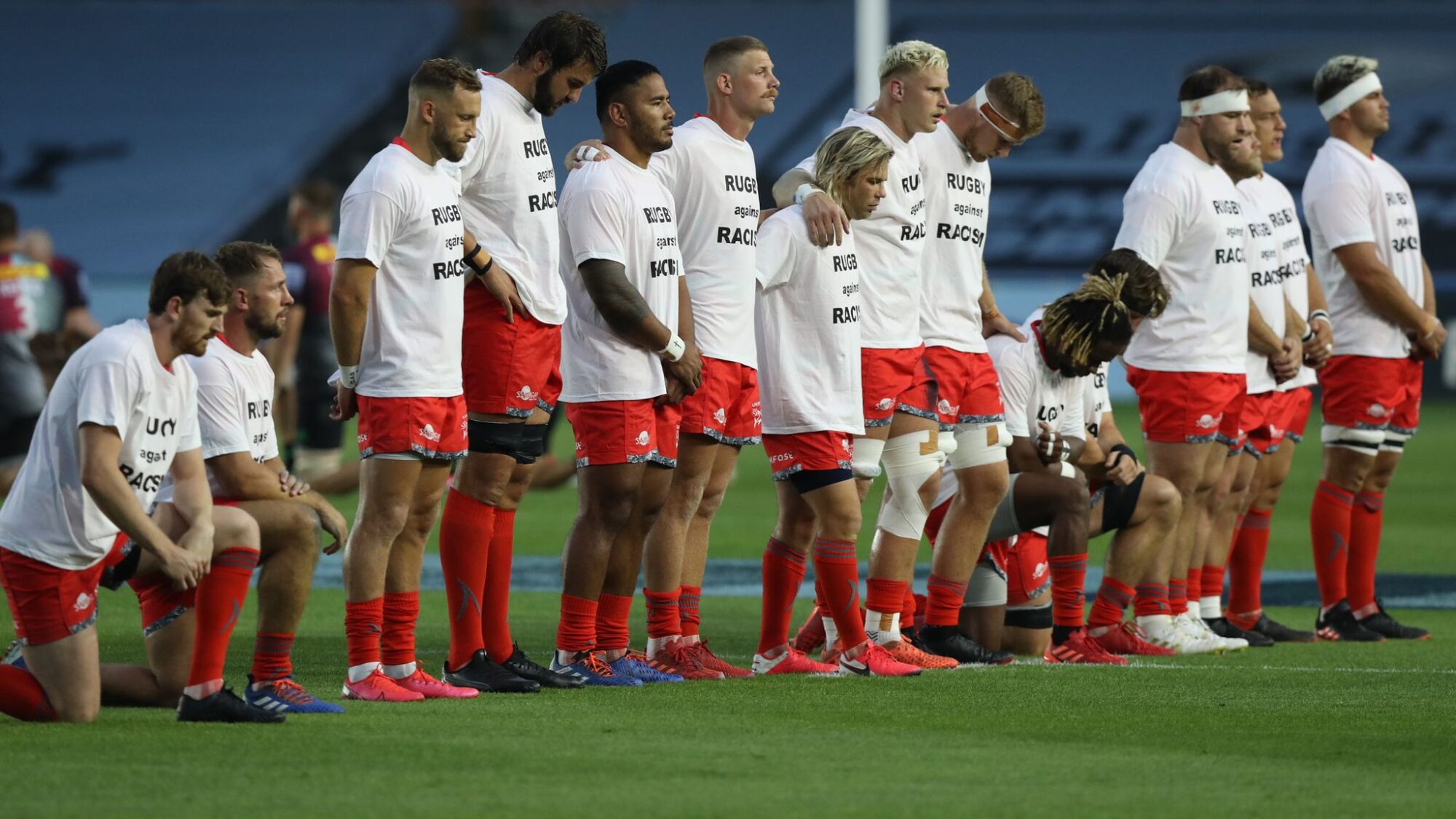 Memory still has it, a few months back there was global outrage following the death of George Floyd, a black man who was killed at the hands of an American police officer, Derek Chauvin, in Minnesota. The fallout resulted in several weeks of protests.

A few days after the death of Floyd, video footage of the said officer Derek Chauvin gripping his knee on the neck of Floyd for 9 minutes despite Floyd audibly pronouncing that he could not breathe surfaced.

Despite calls from notable celebrities and the majority of the populace to take action against the incident, it was not until protesters took to the streets to voice their anger against police brutality and anti-black violence in America that Chauvin was eventually charged with second-degree murder.

Before this development, protest against racism, and police brutality had made headlights into the world of sports as athletes across the world have been required to take a knee before the start of any sporting events as an indication of a silent protest against racial abuse and inequality.

Rugby, which is ranked 13th amongst the world’s most intense sports as regards the degree of difficulty, became the latest sport to resume action since the restart, which was caused by the advent of the coronavirus global pandemic.

After five months and six days out of action, the Premiership Rugby Union returned on Friday with rugby club Harlequins hosting opposition visitors Sale Sharks. Before the halt of fixtures back in March, Harlequins sat in 7th place on the table of 12 teams, tied on 28 points with Lon Irish who were just a place lower on the table while Sale Sharks on the other end sat 2nd place, 5 points behind Exeter in the first position.

A few days prior to the Premiership Rugby restart, the organizing body of the competition released a media statement to support all clubs and players as they show respect for black lives and racial equality. A banner that displayed the phrase “Rugby Against Racism” was also put in place, giving every team enough time to honor the equality movement under the banner.

A working group that comprises of black players from across the league also clearly explained that the support of the positive movement, Black Lives Matters, was not in any way endorsing any political ideology whatsoever.

All 12 premiership Rugby clubs also released a statement on the strategy which their teams will take to support the movement. Harlequins stated that they would be supporting the Black Lives Matter movement with all members of the squad taking a knee. At the same time, their opponents, Sale Sharks, which they faced on the 14th of August in a 16-10 victory pledged in a statement to stand together in the face of all discrimination as their entire matchday squad would wear the “Rugby Against Racism” t-shirts when they face Harlequins at the Twickenham stoop stadium.

Into the fixture, however, shortly before the English Premiership Rugby game between these two sides, controversy and outrage spark as 11 of 15 squad starters of the Sale Sharks team abruptly refused to bend the knee as only 4 English men Marland Yarde, Tom Curry, Simon Hammersley, and Sam Hill were the only players who opted to kneel. On the other hand, their opponents Harlequins had all their players take a knee to support the “Black Lives Matter” movement.

What remained questionable in this display of reluctance was the fact that the other 11 players who refused to honor the knee gesture were majorly all South Africans which included Coenie Oosthuizen, Akker VanDer Merwe, Jean-Luc du Preez, Faf de Klerk,  Lood de Jager, Dan du Preez, Rob du Preez, and team captain Jono Ross. With the remaining 3 being England centre Manu Tuilagi, Welsh prop Willgriff John and Scotland wing Bryon McGuiguon who were both born in Namibia.

In defense of his teammates’ actions, Sale Sharks captain Jono Ross stated that “As a squad, we are all completely against racism in all forms and I don’t think anyone in our squad is racist.” He also claimed that wearing the t-shirts with the “Black Lives Matter” inscription was enough to support the movement and it didn’t matter whether they didn’t include taking a knee.

Sale Sharks coach Steve Diamond also described the controversy surrounding his South African players’ refusal to bend a knee in the fixture as an exaggerated case and a  storm in a teacup. He stated that the decision of the four of his players who took the knee in the match was solely their entitlement. He said that despite all these players wearing the Rugby Against Racism t-shirts, it was too much of a worry to consider taking a knee as mandatory.

Before the premiership restart, the Rugby Players’ Association alongside the Players’ Union in England had explained the Premiership’s approach towards the movement, stating that how each of their members chooses to act concerning the movement was a matter of their personal choice and their association respect and defend the individual rights of any player to make such decision.

On receiving the report of the action of the South African players, South African Rugby Chief executive Jurie Roux confirmed that the Rugby regulatory body will decide on an appropriate course of action. When being pressured to give a statement, he said he could not comment on the meeting of the Excos until it had taken place, stating that whatever he said before the meeting will just the mere speculations.

STANCE OF OTHER RUGBY PLAYERS

In reaction to the negative reception of some South African players’ refusal to take a knee in the English Premiership Rugby matches, Namibia international Rugby player, Renaldo Bothma has lashed out at what he felt was a political reaction rather than an anti-racist movement.

The former Bulls and Sharks forward in response to the criticism stated that it was unreasonable to be forced to kneel with exception to the requirement of his religious beliefs. He said:

“I don’t care how many threats I receive, there is not one person in this world that can force someone to take a knee for something or someone else than God. He also believes that players wearing t-shirts with Black Lives Matter inscription has already gained significant traction across the globe and it was enough to support the course. In his opinion that the lashout was purely political, he lashed out in a statement saying: “all you pathetic ministers, sort out your corrupted ANC(Africa National Congress) which is the South African republic governing political party, before questioning any sports athlete”.

Just about 24 hours after the incident in the match between Sale Sharks and Harlequins, Billy Vunipola was also one of the many players who had a different opinion as regards the knee movement. The Saracen’s player in a Premiership match against Bristol, which his team lost, also refused to bend a knee while his elder brother Marco knelt. Vunipola told The Good, the Bad, and the Rugby podcast that his view of the movement did not align with his belief as a devout Christian. He said some of the protesters were seen burning Churches and Bibles, and he would never support that as a Christian.

All Harlequins players as opposed Sale Sharks, took a knee in the opening match fixture, and team winger Nathan Earle believes that refusal of some teams or specific players to take a knee was just sheer arrogance as he calls for Rugby to get rid of the elite status and appeal to all.

The Hong Kong-born English man who recently opened up on his previous experience with racism as he was called a black cock has called for Rugby to take action for equality. In his opinion, taking a knee should continue if Rugby was going to embrace equality. He said all his teammates in Harlequins will continue the gesture for the remainder of the season and doesn’t think they are going to stop. He concluded that while some rugby players are allowed to opt against performing the gesture, the relevance will soon fade away, and all the demonstration of solidarity would not have been worth it.

In as much as some laws and rules protect any individual or athlete as regards right to freedom of choice, it is only proper that honoring procedures and guidelines set aside in a social setting should not be negotiable, else such individual or body should not be inclusive in such gatherings by choice as well if religious and cultural restrictions would be a restraining factor as sports is believed to be an abstract religion on its own.

As for the players who had the excuses of wearing the mandated Rugby Against Racism T-shirt as proof for supporting the Black Lives Matter movement, on the contrary, it is glaring that this was obviously done just as a means of protecting their pay cheques and nothing more; If you live in Rome, you should act like the Romans.