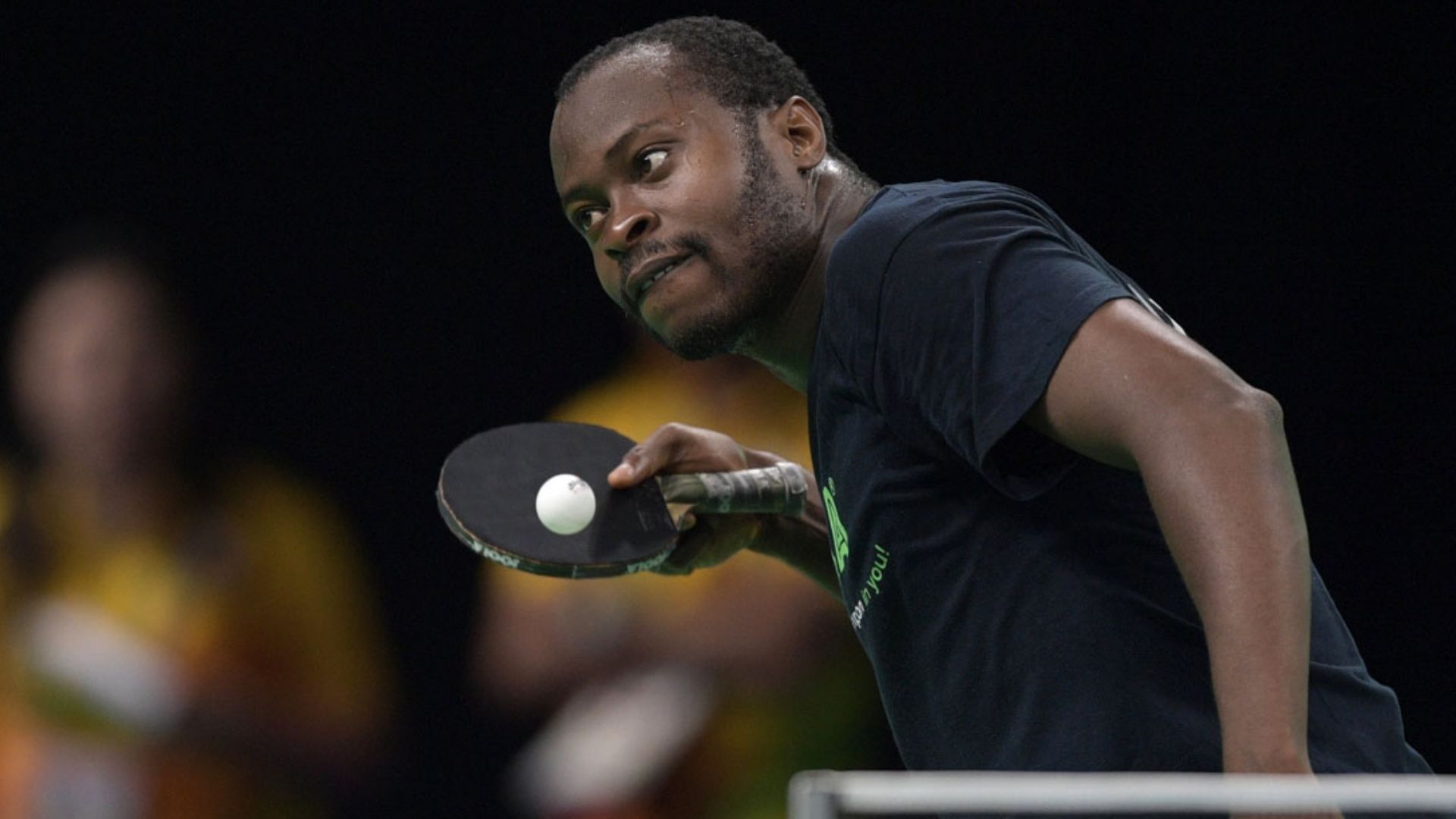 Looking from a critical and unbiased point of view, of all the over 800 sports played worldwide, none should be rated above the other as long as there’s always an opponent to put out stern competition against.

Although table tennis may be one of the few non-contact sports, its competitive nature, which requires players’ overall attentiveness, cannot be overemphasized. Africa, as a continent, has not only produced several great talents in several sporting activities. These players have also been figures of identifiable traits across the globe.

Aruna Quadri is the world-renowned Nigerian table tennis player representing his continent as a standout performer in the table tennis world. The 32-year-old right-handed Oyo State indigene whose favorite maneuver during play is the forehand oriented attacking style is currently a member of the Nigerian security and civil defense corps (NSCDC), an occupation he chooses as a means of livelihood before he plummeted to the bigger stage.

Aruna sometimes returns to handle his primary occupation whenever he is on a break or is taking a holiday from table tennis.

While growing up, he attended Oba Adeyemi High School in the southwestern part of Nigeria, Oyo State. As a rookie, Aruna would see out challenges from his colleagues in table tennis duels, an activity which was his hobby.

However, he was quick to master the art and was summoned to represent his High School in both community and competitive table tennis events. Haruna didn’t waste time proving his qualities as he soon represented his local government area and, on top of it, Oyo state at various table tennis competitions.

Aruna kicked off his table tennis career in Europe in 2010. He was representing Portuguese club side Sporting and is currently at the European Champions League’s semi-final stage. In the Portuguese league, Aruna has remained unbeaten for the past five years, and he has also single-handedly guided the club to consecutive league titles. In the 2012 summer Olympics, which was held in London, Aruna represented Nigeria at the table tennis men’s single. He defeated Spain’s Carlos Machado (4-2) before bowing out in the second round to Turkey’s Bora Vang by 4-2.

Aruna soon returned to action in the next edition of the Summer Olympics, held in 2016. In the first round, after many tussles, he defeated Slovakian player Wang Yang (4-1). However, the drama started in the second round when he faced Taiwanese professional table tennis player Chiang Chih-yuan. It looked like a good run of play for the Nigerian and a complete frustrating moment for his opponent.

Aruna defeated Chuang in what could be said to be the tournament’s biggest upset as he smoothly railed over his opponent flawlessly in a (4-0) thumping without losing a single set. In the third round, Aruna faced renowned German player Timo Boll who as of June 2019 was ranked 6th in the ITTF world ranking, and Aruna remarkably defeated Boll 4-2.

The win earned him a quarter-final spot against the tournament’s number one seed, China’s Ma Long, the current Olympic and world champion. At this stage of the competition, Aruna was naught with Ma Long’s fast pace and looping attacks, which was too overwhelming for the Nigerian Ace.

However, Aruna decided to give Long a run for his money despite knowing that he was no match for the Chinese hence he resorted to defensive play and some back-from-the-table moves, which created an entertaining scene providing memorable rallies.

In the long run, Long eventually swept Aruna off his feet by seeing him off to a non-responsive 4-0 defeat.

Away from identifying as an African in the international scene, Aruna raised his own motherland flag when he competed in the 2017 ITTF African Cup. In his journey to glory, he defeated Algeria’s Naim Karali 4-1 in the quarterfinals, had a close call against Egypt’s Mohammed El-Beiali as he
saw him off to a 4-3 defeat in the semi-final stage. Qualifying for the finals. Aruna faced long-term rival Omar Assar in a breathtaking encounter to emerge winner in a 4-3 win. He won the tournament hence becoming the 2017 African Cup Champion. About a year later, in another edition of the competition, these two met again in the finals. Still, the Egyptian had the last laugh after a failed forehand loop from Nigeria’s Aruna.

Aruna Quadri won the award for the Outstanding Sportsman of the Year Award at the 2018 Nigeria Sports Awards. He was also the first African to reach the quarter-final stage of the table tennis Summer Olympics that took place in Brazil in 2016. In 2018 at the Commonwealth Games in Australia, he finished with a silver medal. In the Polish Open, he emerged the competition winner, being the first African to win the ITTF championship outside the continent.

“Table tennis has given me life, it has given me almost everything I want and has changed my life positively”

According to a video posted by ITTF Africa to commemorate the day.

Surprisingly, Aruna Quadri has never had a coach in his entire table tennis career, saying that it’s a luxury he couldn’t afford. He said it was difficult playing without a coach but paying coaches to come to his tournaments means he wouldn’t have been able to afford entry fees for participating in more tournaments.

On the 3rd of February 2020, after 10 years of playing in the Portuguese league for Sporting, Aruna signed a deal to represent TTC Rhönsprudel Maberzell Fulda in the German Bundesliga, and he will start featuring for the German club as from September 2020.

Aruna Quadri stands as a very bright prospect for the Olympics, if not now, in four years. His continued rise has been an inspiration for Africans worldwide.