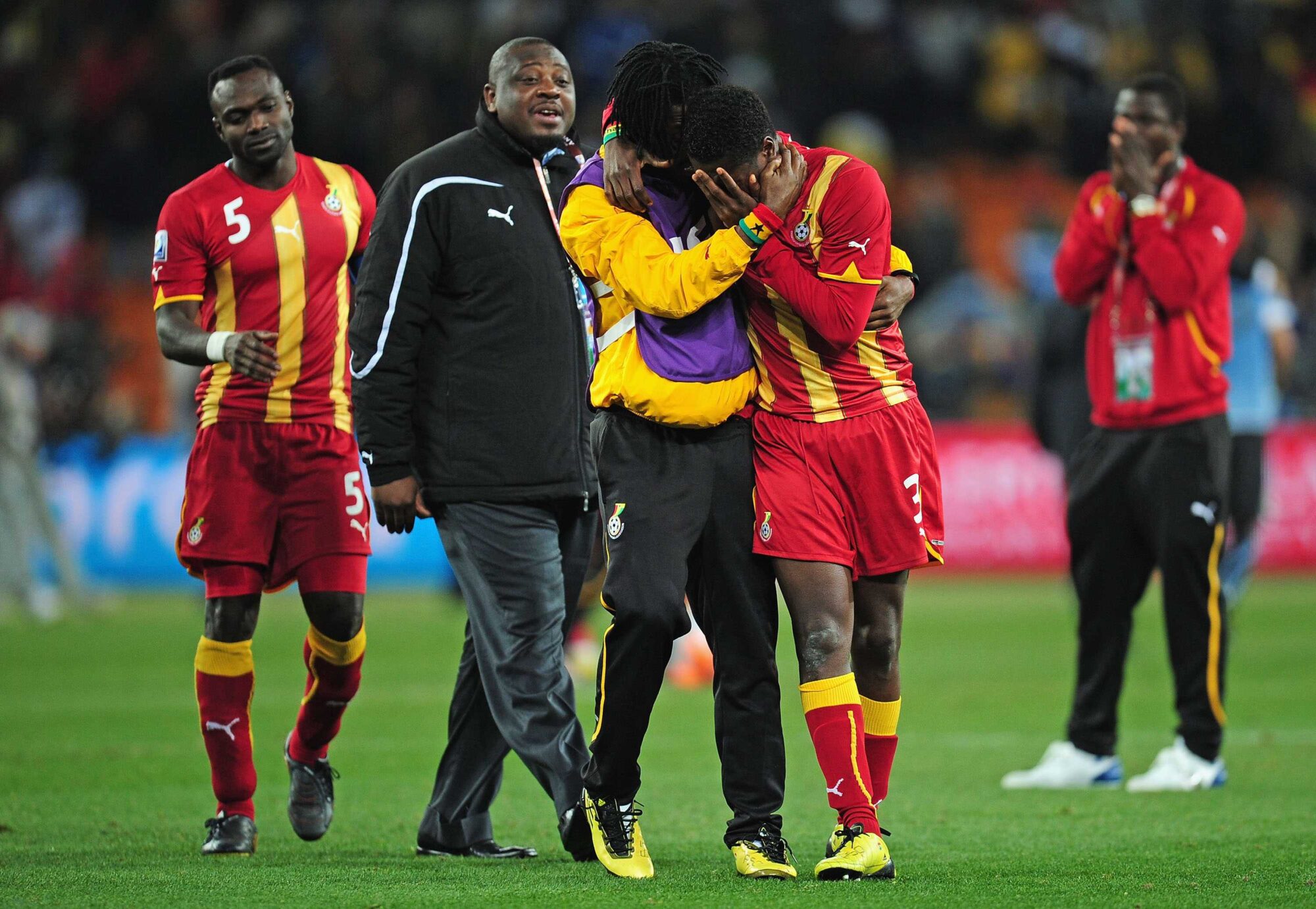 Five Close Moments For African Teams At The World Cup

Africa has a long history of being underdogs on the world stage. From Algeria in 1982 to Ghana in 2010, we break down the Top 5 Most Devastating Moments for African Teams at the World Cup.

5. Algeria vs Germany First Round of the 1982 FIFA World cup

Algeria had shocked the world and beat Germany in their opening game of the world cup in 1982. Germany boasted that it would beat Algeria by at least 7 goals but the Algerian side triumphed over the 1974 champs and beat them 2-1. Algeria would have been the first side to reach the second round of the world cup if not for the match-fixing agreement between neighbors Austria and Germany in their last game. This unsporting behavior by Austria and Germany would eventually lead to FIFA changing the rules for the final group matches at a world cup final.

4. Senegal vs Turkey Quarter Finals of the 2002 FIFA World cup

Senegal became the second African team in history to reach the quarter-finals of the world cup when they beat Senegal after an extra-time goal by Henri Camara in Japan/Korea 2002. In their next match against Turkey in the Quarter Finals, Senegal had an opportunity to become the first African team to make it to the semi-final of a world cup and the first team in the world to do so on their first attempt. But unfortunately, a golden goal extra-time strike by İlhan Mansız meant that dream was dashed.

3. Nigeria vs Italy Second Round of 1994 FIFA World cup

The super eagles of Nigeria started their first world cup outing with a bang when they thrashed Bulgaria 3-0, they went on to win their group after they beat Greece 2-0 in their last game. In their second-round game, Most people fancied them against an Italian side that had been pretty average at the tournament. They led through a first goal by Emmanuel Amunike and led 0-1 until an 89th-minute equalizer by Roberto Baggio meant the game was forced into extra time. Nigeria could not hold on and they ended up conceding a penalty that knocked them out of the tournament. If Nigeria had won, they would have been the first African side to make it to the quarter-finals of a world cup final on their first attempt.

2. Cameroon vs England Quarter Finals of the 1990 FIFA world cup:

In 1990, the indomitable lions of Cameroon almost became the first country to make it to the semifinals of the world cup. They had already set a record as the first team in Africa to make it to the quarter-finals after they beat Colombia some days earlier. In the quarter-final match against England, Cameroon fancied their chances and despite taking a lead through Emmanuel Ekeke in their quarter match against England; two penalties converted by Gary Lineker meant that record would have to wait.

2010 was the year the world cup was hosted on African soil for the first time in history. Ghana was the darling of teeming football fans as they swept through the opposition with their theatrical style of play. In their quarter-final match against Uruguay, they had the opportunity to become the first African side to reach the semi-finals of the world cup if not for some unsporting behavior by Luis Suarez. Suarez denied Ghana a clear scoring opportunity in the last minute of extra time by handling the ball as it was about to cross the line and all the responsibility to make African and world history fell on Asamoah Gyan but his penalty kick struck the upright sending the game into sudden death penalties. In the end, Ghana lost 4-2 to Uruguay.