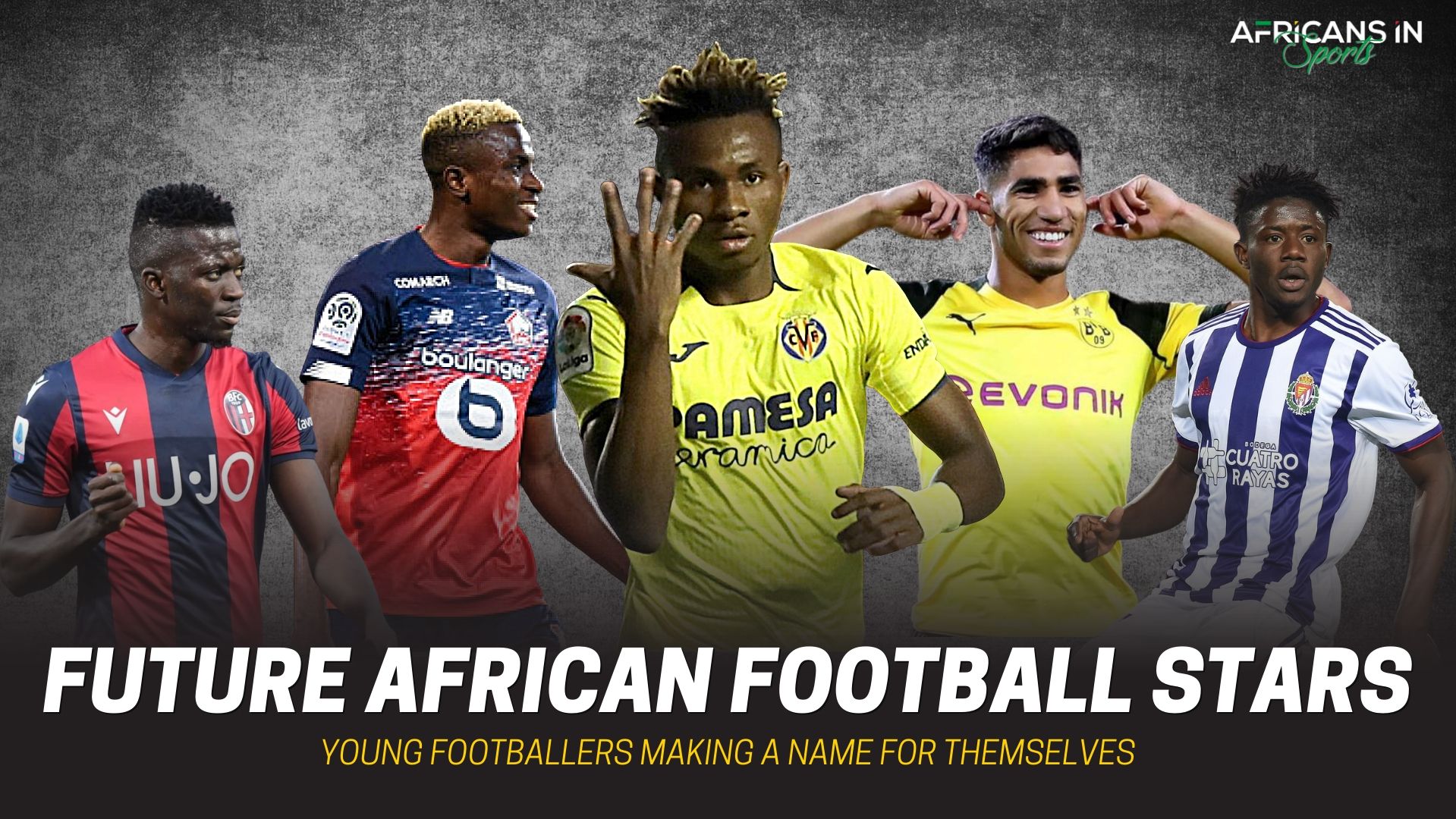 Africa is never short of producing wonderkids that have gone on to shine on the biggest stages. From the Premier League to La Liga to the German Bundesliga and all across the world, African footballers are taking center stage.

From 20 year old lanky Nigerian forward, Kanu Nwankwo who emerged as a future African football Star at the 1996 Olympics in the United States to Ghanian Andre Ayew who announced himself to the world as a wonderkid in 2009 at the U-20 world cup in Egypt.

What about  Samuel Eto’o fils? A striker who emerged as a future African football star with his exploits for Mallorca as a 19-year-old striker after coming through Real Madrid’s youth team and eventually becoming a mega star for Barcelona- a club he scored over 100 goals for, winning all trophies possible including the Champions League and the Spanish La Liga.

A certain mercurial John Mikel Obi emerged as a future African football star at the 2005 U-20 World Cup in the Netherlands where he became the darling of many Nigerians due to his performances which earned him a switch to Chelsea, after a transfer battle with Manchester United. Mikel Obi fulfilled the tag of a future African football star by winning the African cup of Nations with Nigeria in 2013 and also winning multiple titles with Chelsea including the Premier League, FA Cup, Europa League and the Champions League crown in 2012.

We bring to you the future African football stars who will certainly hit great heights and dominate the world of football for the next decade and more;

Perhaps the most popular on this list, the Nigerian left-footed winger has already attracted interest from Atletico Madrid, Barcelona, Chelsea, and Real Madrid.

He plys his trade with Villarreal in the Spanish La liga where world class defenders like Pique and Sergio Ramos have felt the wrath of his pace, skills and dribbles.

As a member of the Nigeria U-17 team, Chukwueze won the world cup in 2015 and was named the tournament’s third-best player. The 21-year-old winger has since gone on to become a regular starter for the Super Eagles of Nigeria, starring for Gernot Rohr’s side at the 2019 African Cup of Nations in Egypt as his country finished third in the tournament.

Another Nigerian on this list who plays for Lille in France. The 2019/2020 season has been his breakout season. He was the top scorer at the U-17 world cup in 2015 with 10 goals and since then, he has been under the spotlight, playing for Wolfsburg and Belgian club Charleroi where he was able to get his career going before switching to Lille in France. Talk around Nigeria has him as the man to break Rasheed Yekini’s record number of goals which stands at 37.

He has decisive instinct in the box and good in the air which helped him score 14 goals in the French Ligue one, finishing as one of the top five goalscorers in a league that has world-class strikers like Neymar, Mbappe &  Cavani amongst others.

The winner of the 2019 CAF Youth player award beating out Osimhen and Chukwueze. He is on loan at Borussia Dortmund from Real Madrid.

In the 2017–18 UEFA Champions League, he made two appearances as Madrid won the title which he received a medal for, becoming the first Moroccan to win the Champions League.

The 21 year old full back has been one of Dortmund’s shinning light and despite being a full back, he contributes a lot going forward, with goals and assists. He can also play as a left back and as a winger.

Named the best young player at the 2019 African Cup of Nations, the Senegalese winger is pacy and has a good eye for goals.

He currently plays for  Club Brugge KV. Diatta was part of the Senegal U20s who participated in the 2017 Africa U-20 Cup of Nations. Reports suggest he could end up in the German Bundesliga and in the Premier League very soon.

The 21-year-old Defender plays for Bayer Leverkusen and he has made a significant impact in the German Bundesliga. Highly rated from a young age, Tapsoba made his Burkina Faso debut at just 17 years, six months, and 22 days old in a friendly against Uzbekistan on 24 August 2016.

Bayern Munich and Borussia Dortmund have the Burkina Faso defender on their books. Fans compare Tapsoda to the likes of Jerome Boateng, given the similarities in their style of play as well as physical build.

Born 9th October 1998 is a Zambian professional footballer who plays as a forward for Austrian team Red Bull Salzburg and the Zambian national team.

Daka scored against Genk in the UEFA Champions League, becoming the first Zambian player to score in the competition’s group stage on 27th November 2019. He is highly rated amongst the Zambian hopefuls who believe he can lead the Chipolopolos of Zambia to an African cup of Nations triumph like Christopher Katongo did in 2012. Scouts for Premier League clubs like Everton and West Ham keeping an eye on the young Zambian’s developments. He was the 2017 CAF Young Player of the Year.

Born 4th October 1998 is a Senegalese professional footballer who plays as a right-back for Spanish club Barcelona and the Senegal national team. He spent the past season on loan at French outfit, OGC Nice and reports say the Barcelona Hierarchy has huge plans for him in the future as they see his long term career at Camp Nou.

In August 2018, Wagué completed a transfer from Eupen to FC Barcelona for a fee of €5 million.

On 13 April 2019, he made his official debut in a La Liga match against Huesca where he played for the entire duration of the game.

He made his first Champions League start for Barcelona on 10 December 2019 as his side defeated Inter Milan 2–1 and it’s Crystal clear that he is one potentially awesome future African football star.

Born 14th November 1998 is a Gambian professional footballer who plays as a forward for Serie A club Bologna on loan from Atalanta.

Barrow joined Atalanta in 2016 from The Gambia where he played football locally and in the street. He started for Atalanta in a 1–0 Coppa Italia loss to Juventus on 30 January 2018, marking his debut while  he made his Serie A debut for Atalanta in a 1–1 tie with Crotone on 10th February 2018. Since then, he has continued to attract interest from both Milan clubs in Italy as well as from Juventus.

On 26th October 2019, he scored his first professional goal by netting the second of a 2–0 home win against SD Eibar.

Born 16th February 2000. After a season with Empoli in the Italian top flight, Traore played a part in helping Empoli get promoted the year before. Traoré alerted a number of clubs including Juventus. Fans often compare him to the legendary Didier Drogba. Rumor has it that as many as 7 major European clubs are scrambling for his signature.

The sky can be the starting point for the 20-year-old forward who is a fox in the box, can operate on the flanks, and is regarded as a deadly finisher.

As current Mega African stars like Sadio Mane, Mohammed Salah, Aubameyang continue to dominated the world of football, earning Ballon d’or nominations, winning the Premier League and the Champions League and finishing as top scorers in the Premier League and German Bundesliga, the afore listed 10 Future African football stars are ready to take over and continue from where Mane and co have stopped at.