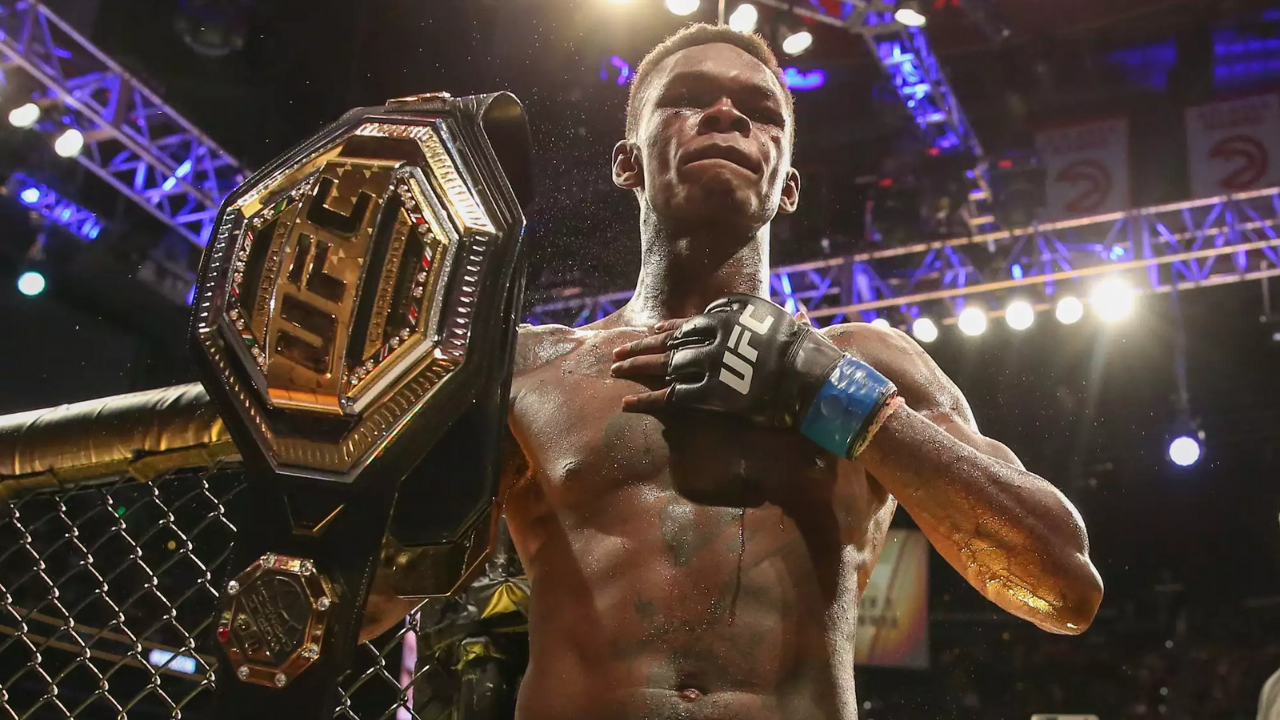 Israel Adesanya is the current UFC middleweight champion who has an undefeated record of 20 wins and no losses. On September 26th, 2020 he successfully defended his UFC title against Paulo Costa in starstudded fashion.

Mixed martial arts (MMA) today is the fastest growing sport in the world. Leagues are popping up all over the world, including Africa with the Extreme Fighting Championship (EFC) established in South Africa as the largest MMA company on the African continent.

Israel Mobolaji Adesanya is a Nigerian-born New-Zealand professional martial artist who is currently signed to the Ultimate Fighting Championship (UFC) and competes in the middleweight division of the championship. He was born in Lagos, Nigeria, to Nigerian parents Oluwafemi and Taiwo Adesanya, who are an accountant and nurse, respectively.

While growing up, Israel enrolled in the after-school taekwondo club at Chrisland school in Lagos as he had had an eye for martial arts and his passion for the sport made him excel in his early startup. Although Israel didn’t grow any significant interest in the sport in high school, in an interview, he attributed his decision to pursue martial arts as a career to his mistreatment at the hands of bullies during his high school years.

Israel however, suffered a controversial loss in the quarter-finals to opponent Daniel Ammann through unanimous decision despite outpointing him in the quarter-finals. After the dramatic encounter, Israel Adesanya entered again for the Super 8 boxing tournament in May 2015, which was the second cruiserweight series where the winner gets a cash prize of NZD 25000 and a new car. In the match against fellow New Zealander Asher Derbyshire in the first seed, Israel knocked his opponent out through knockout.

Israel Adesanya’s boxing career was however short-lived as he only participated in 6 boxing matches as a professional, winning 5 with his only loss coming against Daniel Ammann whom he lost to in his first match through a unanimous decision.

While Israel Adesanya was playing out in the boxing ring, he was also actively involved in kickboxing simultaneously. He became the first New Zealander to sign a deal with the Glory promotion company with his debut kickboxing match coming against Belgium’s Filip Verlinden. Again, Adesanya lost his debut kickboxing match through unanimous points decision 30-27 to Filip Verlinden in the glory 15 international boxing competition held in Istanbul, Turkey. That loss marked the only second loss of the then 24-year old’s career.

After his thirty-third career win over fellow New Zealander Charles August, Israel announced that he would participate in King in the Ring kickboxing tournament which is a last man standing 8-man tournament to be completed in just one night.

He won the cruiserweight boxing event with wins over fellow countrymen Slava Alexeichik in the quarter-finals, Pati Afoa in the semifinals, and Jamie Eades in the finals respectively. Of all 80 kickboxing matches Adesanya participated in, he has won 75 of them and lost just 5 times.

Adesanya’s first appearance in the mixed martial arts (MMA) came when he made his professional debut in 2012. He put up exceptional show fighting in Hong Kong, Australia, and China for about six years. During these times, he amassed a record of 11-0 total victory with all his wins being decided through KO(Knockout) and TKO (Technical Knockout) before he was eventually signed by the Ultimate Fighting Championship (UFC).

After Adesanya made his last round of kickboxing fight in March 2017, which he lost to Brazil’s Alex Periera in the glory of heroes seven events, he has since then opted for the mixed martial arts as a career.

In December 2017, Adesanya signed with the UFC as he made his debut appearance against Australia’s Rob Wilkinson in February 2018 at UFC 221. Israel Adesanya had a hard time in the match with Rob Wilkinson as the Australian mixed martial artist produced 16 takedown attempts. Still, Adesanya commanded the tune of the match with his never-failing hands and knees as he targeted Wilkinson with high kicks and jabs.

At the 3:37 minute mark of the second round, Israel finished off his opponent with an onslaught of strikes to put the bout to bed with a perfect 12th straight win to open his career.

Adesanya, who used to participate in the cruiserweight categories when he competed in boxing and kickboxing events, entered the UFC middleweight championship in April 2019 as a first-timer in that category. He faced America’s Kelvin Gastelum for the interim UFC middleweight championship at UFC 236. He won the match through a unanimous decision, and the fight earned him the fight of the night award, which goes to fighters who delivered the most impressive fight on the card. Furthermore, the fight was widely regarded as the best fight of the year, earning a nomination from most of the MMA news outlets.

On September 27, 2020, in his title defense match, Adesanya faced Brazil’s Paulo Costa at UFC 253. It was the second time in the history of the UFC that two undefeated males fought for an undisputed title. Going into the match, Adesanya was already tipped to be the match favorite, and he even exceeded expectations as he brought the fight to an end in the second round.

By putting up a dominant performance in the match, Adesanya, who ranks as an undefeated middleweight champion, kept his winning ways alive with a complete and total masterclass against Brazil’s Paulo Costa. If there was one thing Adesanya did right in the match out, it was his strategic maneuver in seeing out his opponent effortlessly.

From a strategic distance, Adesanya repeatedly landed clean and heavy kicks on the lead leg of Paulo Costa in a bid to weaken and render it unproductive for the Brazilian. At the end of the opening round, the outside of Costa’s left leg was extensively damaged and destabilized. At the start of the second round, Adesanya went straight to targeting Costa’s already damaged leg. The Brazilian found it challenging to close the gap and reach the Nigerian-born New Zealander.

With just minutes into the second round, Adesanya landed a high left kick on the side of Costa’s head to daze him before accompanying it with a strong left hook to the head to drop Costa to the dust. Ground and pound from Adesanya at Costa eventually brought the bout to an end making it four UFC title wins for the Nigerian representative.

Adesanya is who is also called “The Last Stylebender,” got his alias in reference to Avatar: The Last Airbender, which is an Anime-influenced cartoon series and also has the image of one of the show’s main character tattooed on his forearm. As the fan of anime that he is, he stated that he would like to start an anime production company after retiring from fighting.