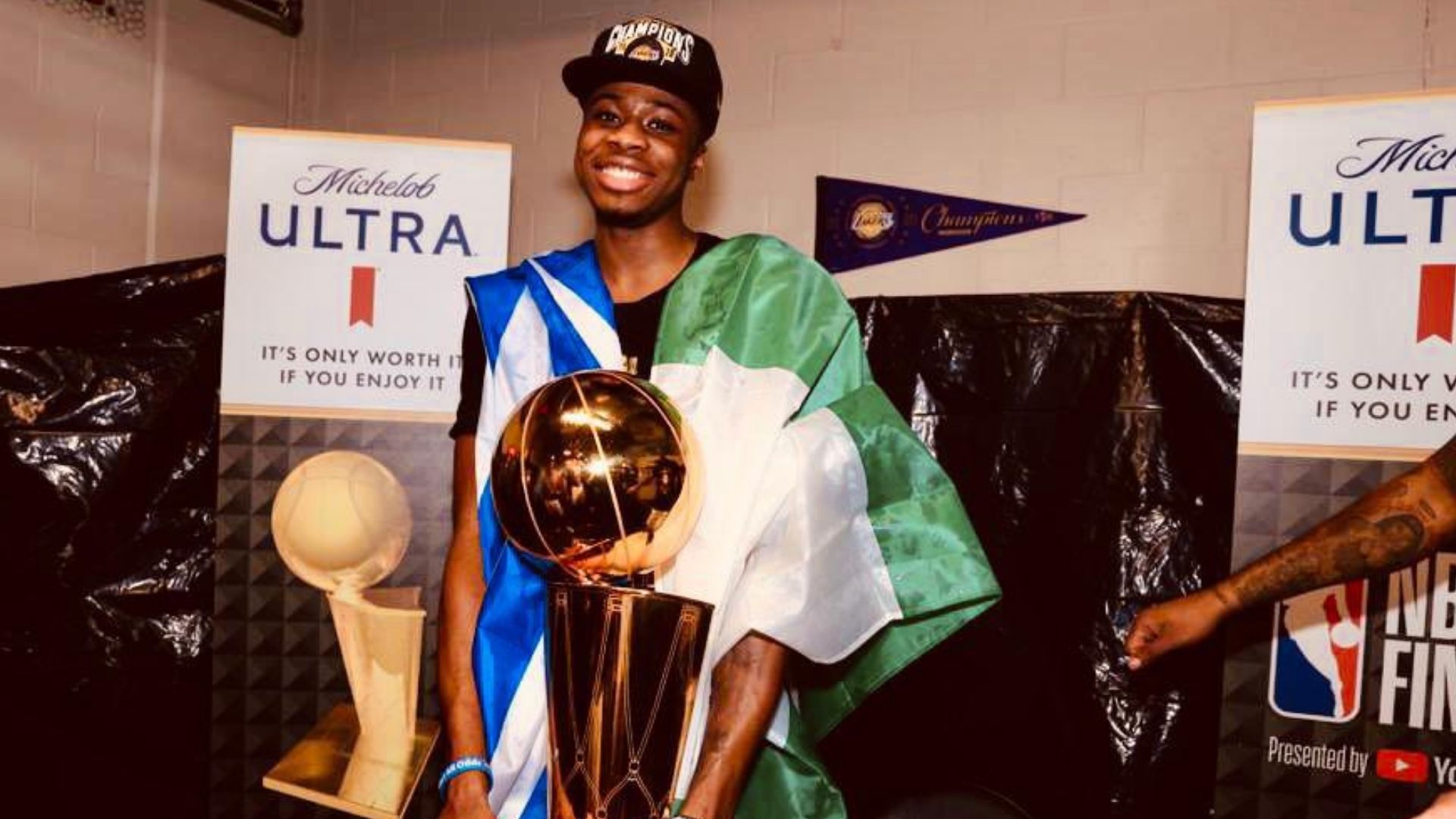 Needless to reiterate how common it is to see sportspeople with origins from the African continent who are diasporas perform tremendously well for the teams they represent, Greek-born Nigerian Kostas Ndubisi Antetokounmpo is the latest to have hit the headline for triumph in sports.

The Los Angeles Lakers took home to Larry O’Brien trophy Sunday, where Nigerian-Greek player Kostas Antetokounmpo is one member of the elite team to win the championship.

Who is Kostas Antetokounmpo?

Kostas is a Nigerian-Greek professional basketball player for the Los Angeles Lakers of the NBA. He was born in Sepolia in Athens, Greece to Nigerian parents Charles and Veronica who live in Greece as immigrants. Kostas has a family history of athletes as his father Charles was a former Nigerian football player while his mother Veronica was a high jumper.

As struggling immigrants in Greece, Kostas’ family dealt with a great deal of racism and several other challenges, which helped them drive towards the NBA.

In 2017, Kostas’ father, Charles Antetokounmpo, died from complications after being taken to the hospital for chest pain complaints but died 10 days later at the age of 53.

Kostas attended Dominican High School in Whitefish Bay, Wisconsin, in the United States of America, where he played high school basketball during his junior and senior years. As a senior player, he helped Dominican High School win a fifth straight state title with a 27-1 over their opponents, and he became one of the seven flyers to win a state championship in high school.

After an impressive career playing high school basketball, Kostas moved on to play college basketball at the University of Dayton in Ohio, USA. In his first outing with the Dayton Flyers in the 206/2017 season, Kostas was deemed ineligible to participate after being ruled out as a partial qualifier due to having spent his first two years of high school in Greece. He however was cleared for action a year later in the 2017/2018 season as he averaged 5.2 points per game, 2.9 rebounds, 0.4 assists, 0.2 steals, and 1.1 blocks per game despite averaging just 15 minutes per game the entire season.

In a bid to further his basketball career, in March 2018, Kostas, a Dayton redshirt freshman, declared for the NBA draft. The 6-foot-10 power forward who was shuffled in and out of the starting lineup in his college’s basketball team stated how his move for declaration for the NBA draft was driven by his desire to gauge his standings with NBA teams. Few months after his entry request for the NBA draft, Kostas was one of the record-high players to be selected for the 21-man NBA draft combine.

Being the last pick of the NBA draft, he was selected by the Philadelphia 76ers but was immediately traded to the Dallas Mavericks. He then signed a two-way contract that would see him split his playing time between the Mavericks and their NBA G League affiliate, the Texas Legends, a team in the NBA minor basketball league. Kostas made his match debut for the Mavericks in March 2019 as his team lost 118-126 to Portland Trail Blazers.

After four months with the Mavericks, Kostas was waived by Dallas Mavericks from the team as he was on a two-way contract. He also only appeared in two games for the Mavericks the whole season as he spent most of his time with his second-tier team Texas Legends in the G League, playing 40 games and starting 25 times for the Legends.

General manager and president of basketball operations Donnie Nelson, in a press release, said the wavering of Kostas from the team was to grant him the leverage to pursue other professional basketball opportunities stating how hardworking the Greek-born Nigerian had been.

In July 2019, Los Angeles Lakers claimed off  Kostas’ waive by the Mavericks to put him back on the two-way contract deal. His most impressive performance for the Lakers came when he scored a career-high 7 points in the teams 136-122 loss to the Sacramento Kings in August 2020.

Better known to the world is Kostas’s older sibling, Giannis Antetokounmpo, a basketball player for the NBA team Milwaukee Bucks. Despite starting his basketball career ahead of Kostas and being undoubtedly more talented, Giannis has yet to secure an NBA championship with his team which he has signed for since 2013.

Giannis is best known for bagging several awards during the course of his career, with the latest being his second consecutive award as NBA Most Valuable Player in 2020 with his first coming in 2019.

He also made the NBA all-star teams from 2017 to 2020. In the 2016/2017 season, Gianni had already established himself as one of the NBA’s most devastating slashers and transition scorers. With all these accolades to fall back on, the NBA championship title remains the only yardstick of basketball success between him and his brother Kostas Antetokounmpo.

Despite expectations being that Giannis would be the first Antetkumpbro to lift the trophy, Giannis was proud of his baby brother’s accomplishment writing on social media:

Kostas has featured for Greek’s under-20 national team and also played at the 2016 FIBA Europe under-20 championship division B where he won a bronze medal by averaging 1.3 points per game, 1.8 rebounds, and 0.3 assists in the tournament. Unlike his brother Giannis who in 2014 cemented his place in the Greek national basketball senior team after an impressive 2013 campaign in the junior team, Kostas is yet to secure his first call to the Greece national basketball senior team. Asides from Giannis, Kostas also has two other siblings in Thanasis and Alex who play for Milwaukee Bucks and Spanish side UCAM Murcia respectively.