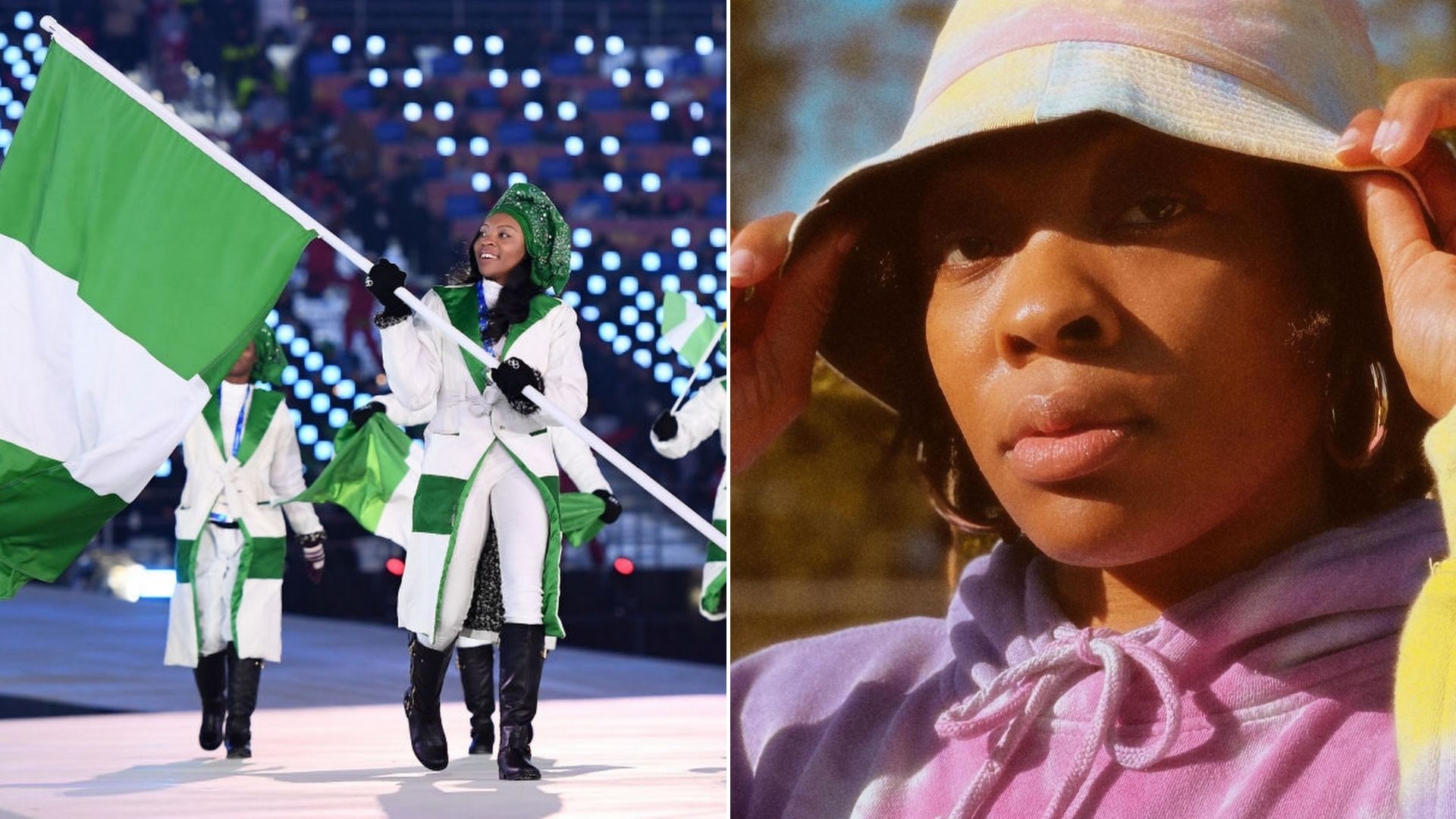 Q&A: Ngozi Onwumere “Nigeria is in me, that doesn’t change and I think that rings true for music too”

The day comes when all great athletes step away from the game. The question most have to ask is “what now?”

28-year-old Ngozi Omumere, famously one of the three women who pioneered the Nigerian bobsled team that shocked the world by qualifying for the 2018 Winter Olympics, has found her “now” in music.

Since the Olympics, she has released a substantial catalogue of music including her debut EP Mindless Thoughts and her 2020 single Waves and Emergency which is set to be released on November 2nd.

Africans In Sports spoke with Ngozi this week to learn more about her transition into music and what the future might hold for the former Nigerian sports star:

Q1. The world knows you as one of the three women who pioneered the Nigerian Bobsled team that made its Olympic debut in 2018, but since then, you’ve hung up the jacket and transitioned into music. How did that all come about?

I’ve always had outlets to express myself – sports was the first (more natural for me) and music was the second. After competing in the Olympics – a lot of the fear I had associated with public speaking and really public anything went away. Music took the front seat in becoming an outlet for me to express myself.

Q2. Where did this passion for making music come from?

As a kid, my sister had a group called – Unit 33. It was a group full of our cousins, and I was a designated dancer. Funny to reflect on. My sister has done music for a long time, and ultimately I watched her in the studio, turn down major deals, etc.; basically everything in business an indie artist would have to do.

I initially just liked the release of creating. She would force me to get in the booth. I wrote my first public hook/verse on her album, and after that, I knew I could do it, it was just a matter of if I wanted to as a shy reserved kid. I literally had to talk myself up every time I got in the booth, but I loved it.

Q3. How do you blend the mix of your American upbringing and Nigerian roots into your music?

Nigeria is in me, that doesn’t change, and I think that rings true for music too. Afrobeat is going crazy right now and leading in the music industry but to see Nigerians all over, do all types of music, just further emphasizes how multifaceted we are. I used to use a stage name but realize my name has so much meaning in itself.

Q4. What kind of singer would you classify yourself as?

Good question; I am respecting the process in knowing that growth is an aspect that plays into who you really are as a human first then singer,  but generally I would classify myself as a singer who sings how I feel; that translates across different genres/sounds from time to time.

Q5. Who are your biggest influences?

I would hands down say God.

Q6. How has your mindset changed from your first album released in 2018 and now your new singles Wave and Emergency?

I used to wonder where my music would fit in within the music industry. I didn’t want to do gospel or contemporary Christian music, so I just made music I could feel, hoping others could too. Waves and Emergency have been songs I’ve grown through, and really soul searched to find my sounds. Still searching, I think it’s continual.

Q7. What should people expect from your music and you as an artist?

Expect authenticity. There are times I want to make and release a lot of music, and times I don’t have anything authentic to give. Being an indie artist, I have the leverage to keep it all the way organic. Every song you get from me is a song I felt, envisioned, healed through or lived. As an artist, I owe it to myself to grow through my music. It’s not just music for me but also mental preservation. As a listener, – you can expect transparency.

Q8. Your new single ‘Emergency’ comes out on November 2nd. Where did the inspiration for that song come from and what went into the conception and creation of it?

I look at what’s going on in the world, and sometimes I want to be quick to speak but don’t have the words. I can be typing on Instagram and “girl just sing it.” comes to mind.

#EndsSars, Police Brutality globally, watching murder video after video and trying to stay afloat and balanced mentally… It can all get too much, and I know I am not the only one who feels this way. Change is on the brink – “Emergency” entails the birthing pains of a nation externally and basically the listener internally, giving hope.

Q9. Are there any new projects you’re working on? Possibly a second album?

I have learned now to stay locked and loaded. I used to record a few songs at a time and hoard them. Then a friend told me “when you hoard music, you’re the only one listening.” Now I know recording keeps you creative and fresh, everything you record isn’t for release but overtime selections could make some great options for an album. Especially with how I record – some seasons all the songs sound like they just go together.  Albums take a lot out of you and as an indie artist – you are doing it all by yourself primarily which is cool creatively but costly and emotionally taxing at times. So I have a lot of songs in the pipeline but timing is everything.

Q10. Do you see yourself having a similar mentality about your music career compared to your sports career? How do you think your sports experience prepared you for the entertainment business?

You know what? I’ve learned to channel competition differently with music. The competition was mainly the drive for me in sports. Competition in music on the other hand left unbalanced will have you stressed. No lie. There is too much to do all the time – it’s on me to determine the pace. With sports, it’s a build-up and shows up. No guessing game. You work hard, you show up, and the results are more than likely what you put in all season – if you don’t choke. Music you can work hard and not reap anything – it really is a process you have to grow through. Similarly, in both sports and music, your main competition is yourself. Sports prepared me to have tough skin and keep pushing to be better.

Q11. Is there anything else you want to mention?

2. Believe in yourself – anything you want to do will have obstacles but don’t leave anything on the table. Go for it and give it your best.

Lastly, special thanks to AIS for seeing us and focusing on all aspects of current and former athletes lives!

You can preorder her newest single Emergency here