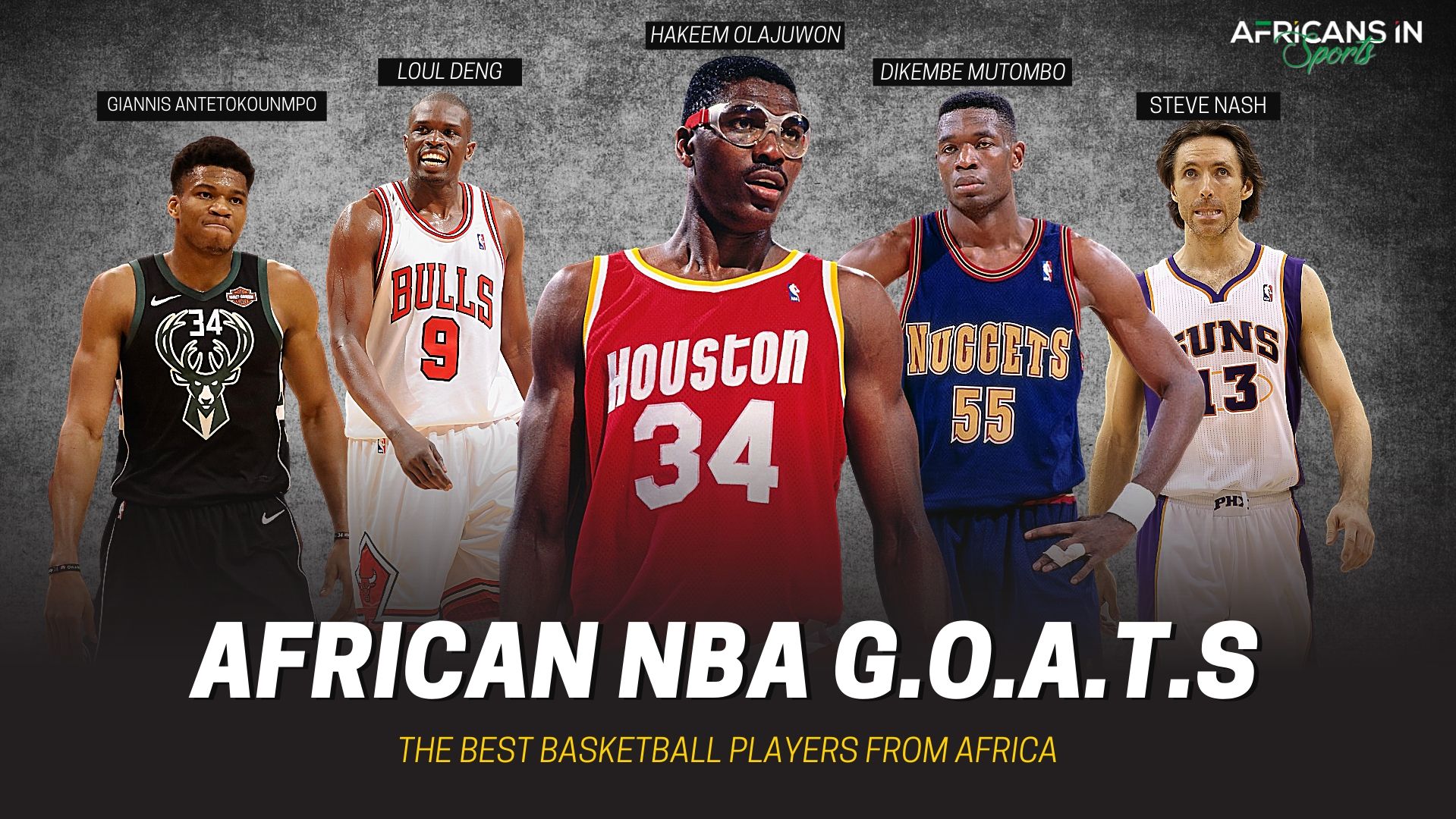 If you were born in the 80s, grew up in the 90s, and enjoyed the NBA boom in the 2000s like I did, eras will mostly not have an influence on your selection on the greatest Africans to play in the NBA. However, the task of selecting the Top 10 African talents to grace the NBA can be likened to the task Coach Chuck Daly had in 92 when he had to select the US Dream team to the Barcelona Olympics – Spoilt for choice and you have to drop Isaiah Thomas. How easy is that?

Africa has had her fair share of star power sprinkling stardust and glamour to the NBA in the last 36 years. From the early days of the great Michael Jordan, African players have stood tall for being corner pieces of championship-winning teams to efficient squad players for great dynasties decade after decade.

We at Africans in Sport are letting you in, on our Top 10 Africans NBA greatest of all timers.

Luc Mbah a Moute announced himself to the basketball world with finesse thanks to sterling collegiate basketball career that saw him and his UCLA Bruins attend 3 straight NCAA Final Four appearances between 2005 to 2008. He eventually got drafted late, 37th overall pick in the 2008 NBA Draft by the Milwaukee Bucks.

Mbah a Moute worked his way into the Bucks starting lineup after just 9 games and in the same stealth mode silently worked his way to become one of the most efficient and top defensive players in his 11year span n in the league. On 22 November 2017, while with the Houston Rockets, Mbah A Moute in their 125–95 win against the Denver Nuggets, famously posted the highest plus-minus of +57, in an NBA game in 20 years.

A true servant of the game Luc has played on six NBA teams and has gained a reputation as a lockdown defender and efficient rebounder. He has recently been bothered by knee and shoulder injuries which has kept him off the court. He last played in the league for the Los Angeles Clippers in 2019.

Victor Oladipo came into the NBA as a top lottery pick from Indiana University in the 2013 NBA Draft. He was selected with the  2nd Overall Pick by the Orlando Magic and he hit it straight earning his first career triple-double 26 points, 10 rebounds and 10 assists in a double-overtime loss to the Philadelphia 76ers on December 3, 2013 ( barely two months into his rookie season); That and other milestone performances ensured he was named in the NBA All-Rookie First Team in 2013.

Interestingly, in a trade deal in 2016, Oladipo was part of the traded asset demanded by Oklahoma City Thunder from Orlando Magic for African top center, Serge Ibaka. He would by 2018 end up an Indiana Pacer after being part of yet another trade package (Paul George to OKC).

Serge Ibaka came on the radar when he picked up an MVP award at the Reebok Eurocamp in Spain in 2008. In a matter of months, Ibaka became the first player from the Republic of Congo to be drafted into the NBA. He was selected by the Seattle Supersonics with the 24th pick in the 2008 NBA draft. The Sonics soon moved to Oklahoma City and rebranded as the Oklahoma City Thunder.

A stand out talent for his defense and shot-blocking prowess in his early days at OKC. Ibaka in his fourth and fifth season (2012-2013) led the NBA twice for the most blocks for a season, an outstanding feat that earned him a place on three NBA All-Defensive First Teams for three consecutive years, 2012, 2013 and 2014.

Siakam attended New Mexico University where he was drafted 27th Overall by the Toronto Raptors in 2016. With more development required he was assigned to the Toronto Raptors G-League Affiliates Raptors 905 which proved to be a brilliant move for both franchise and player. Siakam’s 23 points and 9 rebounds Finals average led Toronto 905 to a 2-1 series win over Rio Grande Valley Vipers in the 2017 G-League Finals; carting home the Finals Most Valuable Player trophy alongside his G-League championship.

Like a Larvae metamorphosing into a beautiful Butterfly, the gentle Cameroonian seemed ready for NBA life and he stepped up his performance in the league. After one full season, he was named the NBA Most Improved Player (2019) and his first NBA Allstar selection came the following year in 2020.

Siakam put pen to paper on the biggest contract signed by an African player in NBA history, a $130 million four –year extension with Toronto Raptors in October 2019.

The gentle giant from South Sudan Manute Bol is the only NBA player to retire with more career blocked shots than points scored. Still ranked today, second in NBA history in blocked shots per game and 16th in total blocked shots. Bol who was drafted 31st overall in the 1985 NBA Draft by the Washington Bullets. He stands as the second-tallest player in NBA history, Gheorghe Muresan holds the record at 7 feet 7inches.

Bol set the rookie shot-blocking record in the 1985–86 season, he later tied the NBA record for most blocked shots in one half (11) and in one quarter twice (eight). On January 31, 1992, in a game against the Orlando Magic, Bol made one of the most remarkable plays in NBA history where he blocked four consecutive shots in a single possession. According to NBA official stats, Manute Bol averaged one block shot per every 5.6 minutes of playing time.

His son Bol Bol was drafted 44th in 2019 by the Miami Heat and currently plays for the Denver Nuggets.

Born in Johannesburg, South Africa to a Welsh mother and an English father. Steve Nash is regarded as one of the greatest point guards to play in the NBA. With a career that spanned 19 seasons with five NBA All Assist Leader Awards, Seven NBA Allstar Selections, two Most Valuable Player Awards. Steve Nash remains the only player in NBA history to be a four-time member of the 50-40-90 club – Larry Bird is the only player to do it more than once and he only managed to do it twice.

Steve Nash’s journey from being the 15th overall by the Phoenix Suns in1996, shuffling between four NBA Franchises in multiple stints, all the way to the Naismith Memorial Hall of Fame in 2018 is nothing short of an epic African folklore.

At just 25, Giannis Antetokoumpo has leaped from a not NBA ready scouting report to the reigning NBA Most Valuable player in just six seasons. Though born in Athens, Greece to Nigerian parents, Giannis’ rise to the top of the NBA has been nothing short of Greek mythology with an African plot twist.

The Milwaukee Bucks drafted Giannis 13th Overall in the 2013 NBA Draft. By his third season 2016–17, Giannis became the Milwaukee Bucks leader in all five major statistical categories and became the first player in NBA history to finish a regular season in the top 20 in all five statistics of total points, rebounds, assists, steals, and blocks. The feat earned him the NBA Most Improved Player award in 2017. The Greek Freak, as he is known by fans and hater alike, was selected by fans to captain the Eastern Conference All-Star team two of his four NBA All-star appearances.

Luol Deng arrived onto the scene as a 19-year-old Duke university star drafted 7th overall by the Phoenix Suns – traded on draft night to the Chicago Bulls – in 2005. The South-Sudanese became an instant star in Chicago averaging 11.7 points per game in 61 games in his rookie year, a feat that earned him a place in the NBA All-Rookie team.

Touted by pundits as the best 2 – way player in the league for at a point, Deng is on the elite list of just Five Africa-born players, alongside Hakeem Olajuwon, Dikembe Mutombo, Steve Nash, and Pascal Siakam to be selected for the NBA All-Star Game. He made two NBA All-Star teams in 2012 and 2013.

Dikembe Mutombo is the originator of the famous finger wag gesture after a blocked shot in the basketball world. Mutombo remains the only other African player to be inducted into the Naismith basketball (2015) alongside Hakeem Olajuwon.

As the fourth overall pick by the Denver Nuggets in the 1991 NBA draft, Mutombo emerged as one of the greatest defensive players of all time in his 18-year career. The defensive juggernaut won four NBA Defensive Player of the Year Awards while Leading the NBA in blocks – 3 times and rebounds twice. He was also selected for eight NBA All-Star games.

On January 10, 2007, Dikembe Mutombo famously surpassed Kareem Abdul-Jabbar as the second most prolific shot blocker in NBA history, behind Hakeem Olajuwon on the list. He also finished his career tied with Hakeem Olajuwon for first place on all-time in triple-doubles that involve points, rebounds, and blocks, his no. 55 jersey is retired by two franchises the Denver Nuggets and Atlanta Hawks.

With ease, Hakeem Olajuwon stands out as the most talented African to ever play the game of Basketball not just because of his two NBA rings and multiple personal awards but his beautiful symphonic mesmerizing move christened “the dream shake”.  Hakeem the Dream is one of only two Africans selected into the Naismith Memorial Basketball Hall of Fame (2008) after a sterling career that ran from 1984 -2002.

Hakeem retired as the NBA All-time Blocks Leader with 3,830 block shots and the only player in history to win the NBA Most Valuable Player, Defensive Player of the Year, and Finals MVP awards in the same season (1993- 1994). He appeared in12 NBA All-Star Games, making 9 All-Defensive teams, 6 All-NBA First teams, carting 2 Defensive Player of the Year awards, 2 Finals MVPs, and 2 NBA Championships. Hakeem Olajuwon was drafted 1st Overall in 1984 by the Houston Rockets, the same draft class with Michael Jordan, Charles Barkley, and John Stockton. to date he remains the only player in NBA history to retire in the top eleven for all four major statistics categories – scoring, rebounding, blocks and steals.

Who else would do you think deserves to be in the Top 10 African NBA G.O.A.T.s Discussion?