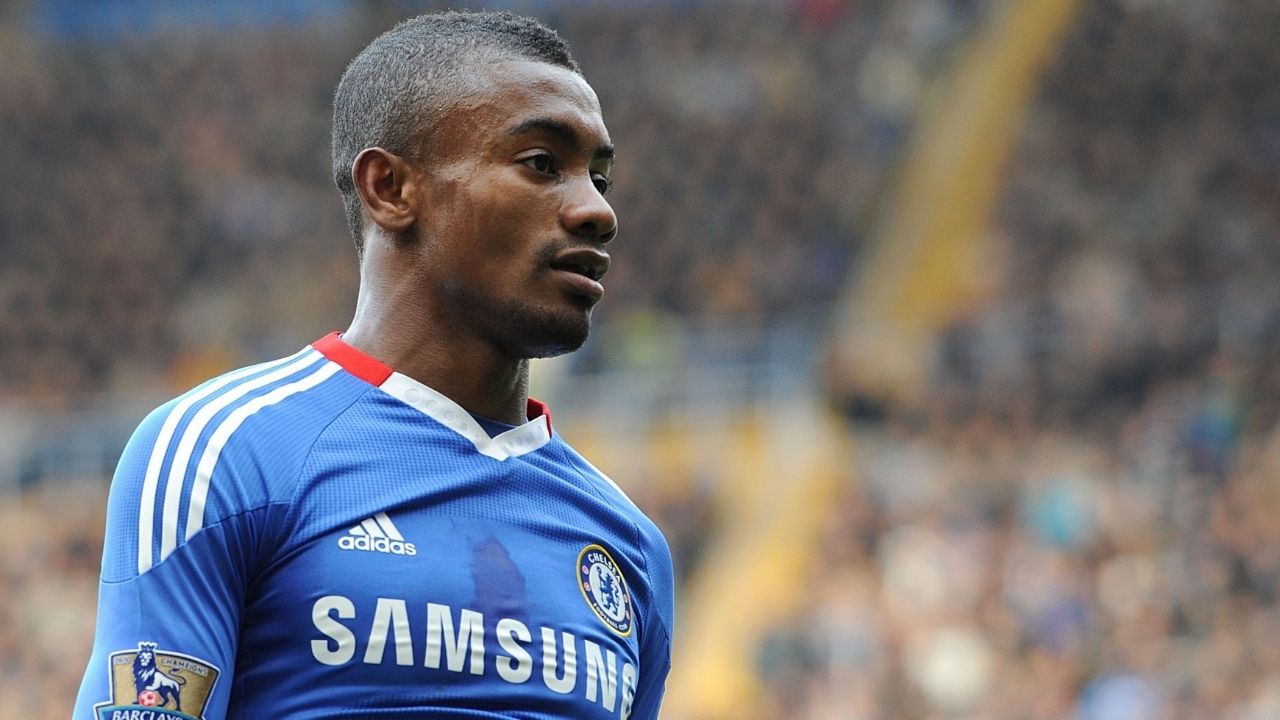 Top 10 Most Underrated African Footballers Of All Time

When it’s time to talk about footballers of African origin, players like Drogba, Eto’o, Roger Milla, Rashidi Yekini, Yaya Toure, Kanu Nwankwo are well rated and perhaps well appreciated for their contributions to the game of football.

But, for others, despite noteworthy contributions, history doesn’t glamorize them as it should.

We bring you a list of the TOP TEN MOST UNDERRATED AFRICAN FOOTBALLERS OF ALL TIME;

In his day, Michael Essien is one of the best midfielders in the world, not just African football.

A model of consistency and versatility, Essien was most known for his endless energy, power, long-range shooting, and an ability to play anywhere the manager wants him to without looking out of place.

Essien earned himself the appropriate nickname, ‘The Bison’ as he played for some of the biggest clubs in the world: Lyon, Chelsea, Real Madrid, and Milan, winning multiple trophies in the process.

Multiple damaging injuries played a part in his lack of recognition.

Perhaps, if there was no Samuel Eto’o and Didier Drogba, Essien would have been named the Best Footballer in Africa at least twice.

Fifty-eight appearances for Ghana and nine goals, his most significant achievement with the Black Stars was a bronze medal at the 2008 AFCON tournament. An achievement that pales in comparison to the multiple trophies he won in club football.

Ghana’s record high scorer and the heartbeat of the squad for many years, Asamoah Gyan should be rated higher in the football world than he is right now.

Gyan recorded 51 goals in 109 appearances for the Black Stars, which include big goals at the World Cup and AFCON. However, his legacy may suffer from the one goal he didn’t score. Gyan missed a crucial penalty kick against Uruguay that could have sent Ghana to the World Cup semifinals.

His club career was not being quite as glamorous. This probably contributed to the underrating of his talents, with Sunderland and Udinese being the most prestigious clubs he played for in his career.

However, 212 goals in 409 appearances are still impressive. Regardless of where Gyan played, although he did win the BBC African Player of the Year Award in 2010, and made the CAF Team of the Year on three different occasions, it still feels like he should get more plaudits.

It is safe to say Mikel is one of those players that fell victim to this football era’s obsession with stats. People tend to focus on how many goals he scored or instead didn’t score. Fans often forget just how good of a footballer he is.

His emergence to limelight did not also help matters as well, Mikel emerged as an attacking midfielder at the U-20 level for Nigeria at the 2005 World Cup.

At the tournament, Mikel shone like a million stars with goals, assists & dribbles which made him the heartbeat of Samson Siasia’s side.

Many saw Mikel Obi as the next Jay-Jay Okocha, only for him to be converted to a defensive midfielder by Jose Mourinho at Chelsea.

Furthermore, at the 2005 Youth World Cup, Mikel was named 2nd best player after Lionel Messi which many felt unfair. At the end of the day, many expected Mikel Obi to then be the second-best player in the world after Messi forgetting that Messi is a striker plus a once in a generation type of footballer.

A deep lying midfielder with incredible strength on the ball, great passing ability and vision, he was a very reliable option for the better part of a decade for both Nigeria and Chelsea FC of England.

Mikel is without a doubt the most successful Nigerian player in terms of honors won in his 10 years at Chelsea. There he won two Premier League titles, 1 Champions League, one Europa League, three FA Cups, one League Cup, along with one AFCON in 2013 for Nigeria.

Despite his incredible longevity and consistency at the highest level of football, Mikel’s highest individual honor was coming 2nd to Yaya Toure at the CAF African footballer of the year awards.

One of the few active players on this list, the Nigerian striker, is, without a doubt, one of the most underrated players in African football, even by his Nigerian fans.

Regardless of what you think of him, Ighalo has always scored goals, no matter where he’s been, from Granada to Watford to Shanghai Shenhua, and now Manchester United, Odion Ighalo is a certified goalscorer.

Even in the national team, he has a pretty good record, 16 goals for Nigeria in 35 games before retiring, bagging an AFCON top scorers award in the process.

141 goals in 365 career appearances so far for club and country should tell you all you need to know about how this man should be getting a lot more respect than he currently does.

At the 2019 African Cup of Nations, where all eyes were on Salah, Mane, and the likes, it was Odion Ighalo who emerged as the tournaments highest goal scorer with five goals, two of which come against Cameroon.

He was also the highest goal scorer during the qualifying phases for the same tournament.

It seems rather odd that a player that once many considered the best on the continent when he won the CAF African Footballer of the Year Award in 2008 would make the list of most underrated African players, but that assertion is accurate.

The thing is, Adebayor gets some praises, but not as much as he should. He should be in the conversation of best strikers in African football history along with the Drogbas and the Eto’os of this world, but he’s not.

Not too many African players can boast of a better career than Emmanuel Adebayor. He’s played for some of the biggest clubs in the world from Monaco to Arsenal, Manchester City, Real Madrid, Tottenham, etc.

For all of his success in club football, his revitalization of the Togolese national team his one of his most significant achievements. He turned them into an actual competitive team and led them to their only World Cup appearance at Germany 2006.

The heartbeat of the Zambian team that shocked Africa by winning the AFCON in 2012, Christopher Katongo doesn’t get enough praise for what he achieved in his career.

The diminutive midfielder can also play as a winger and has an eye for goal, highlighted by his 23 goals in 105 appearances for the Chipolopolo of Zambia.

2012 was by far the most successful year of his career. Not only did he win the AFCON, he claimed the player of the tournament honor, and also won the BBC African Footballer of the Year Award.

The fact that he did not play for some of the biggest clubs in Europe defines and explains why he remains underrated.

An attacking midfielder with superb passing ability and a better eye for goals than most strikers, Aboutrika was the heartbeat of the Egyptian national team that dominated African football.

He led his nation to two AFCON trophies in 2006 and 2008 and won the Egyptian Player of the Year Award for four consecutive years between 2005 and 2008. Although he never won the CAF African Footballer of the Year Award, he won that of BBC in 2008.

Kalou is simply a victim of the era he played in. It’s hard to get much individual recognition when you share the spotlight with players such as Didier Drogba, Yaya Toure, Kolo Toure, etc.

Considered one of the best young talents in football, while at Feyenoord, he scored 35 goals in 69 appearances in a famous strike partnership than with Dirk Kuyt.

After three years in Holland, his talents caught the eye of Chelsea who shelled out £9million for his signature in 2006, and although he would mostly play on the wing, because his compatriot, Didier Drogba was the striker for the blues, that didn’t hinder Kalou from contributing goals.

Kalou played a crucial role for Carlo Ancelotti’s Chelsea side of 2009/2010 and was criminally underrated and underappreciated despite his high work rate, winning tackles all over the pitch, scoring goals and providing assists for Drogba, Lampard, Ballack, and others in that Chelsea set up.

For Ivory Coast, Kalou was an important member of the golden generation despite headlines favoring Drogba and Yaya Toure.

One hundred ninety career goals in 598 appearances so far for Asec Mimosas, Feyenoord, Chelsea, Lille, Hertha Berlin, and a chance to add to that total with Brazilian club, Botafogo, for whom he just recently signed at the age of 38.

Ghanaian Midfield juggernaut, Stephen Appiah, is another player that doesn’t get as much praise as he deserves outside of Ghana.

Known as a gritty defensive midfielder with an eye for goal, especially from long range, Appiah had a long and distinguished career, mostly in Italian football. Still, he doesn’t have many individual awards to show for it.

He led Ghana as captain for many years and managed 14 goals in 67 appearances, while also achieving success in Europe with big clubs such as Udinese, Parma, Juventus, and Fernabahce.

Without a doubt, the best player on this list, also considered by many as the best player to never win the CAF African Footballer of the Year Award, Jay-Jay was underrated.

So good they named him twice, Jay Jay was an attacking midfielder who could also play on both wings, blessed with incredible skill and showmanship, he was a joy to watch.

Jay-Jay received significant criticism for his inconsistency and a lack of end product. He only scored 99 goals for both club and country in 524 appearances in a career spanning 18 years.